Our inspiration for class this week at Fishtown Recreation Center this week came from Vincent Van Gogh’s Starry Night painting. Starry Night is one of the most recognized pieces of art in history and we held a gallery-style observation and discussion about the painting, using a commercially available poster print in lieu of the original. We also taught a mini lesson on poetry that involved listening to a poem and then brainstorming words that later became the basis of an original list poem.

Using Poetry as Inspiration. We began the lesson with a reading of a poem titled Stars by Gareth Lancaster. Our students are accustomed to listening to books at the beginning of class, but listening to poetry was a new experience. We explained that poetry is a form of writing in which the author has carefully chosen descriptive words to make the reader imagine and feel something. We invited the students to listen carefully to the words in the poem and even close their eyes. Several students did this. After the reading, we asked them what they thought was the subject of the poem and what words they heard in the poem that helped them clearly picture the stars. The children easily identified stars as the subject of the poem and recalled words like “sky” “lights” and “shine.”

Formal Viewing and Discussion. We transitioned into the gallery lesson began with a few moments of silent viewing of Starry Night and then we asked the students questions like “What do you see?” and “What does this look like?”. The students all agreed the painting depicted a night scene, but were split on whether it was the ocean or sky. The blue background and white brushstrokes could have supported either theory, but on further investigation, they concluded that Van Gogh had painted the sky because of the stars and moon. With the help of some leading questions, one student figured out the white brushstrokes represented the wind. We recorded their observations in writing and later generated a list poem using the children’s words. This list poem will be displayed at the art show at the end of the semester.

Bringing the Inspiration and Imagination to the Canvas (Paper). Feeling nourished by thoughts and words about stars, we then invited the students to create their own imaginary night sky painting. We demonstrated how to use the paintbrush like Van Gogh did. He used circles, spirals, and small brushstrokes to represent stars and longer, straighter brushstrokes to represent the wind. This lesson in technique showed the students that they could use a paintbrush to convey feeling and movement in their painting — stars glow and winds blow in Starry Night. We encouraged to children to look at the night sky at bedtime and see if the real sky matches their imagined ones.

Tapping into Observation and Imagination. The mini poetry lesson honed the students’ listening skills by requiring them to focus on the words used to describe stars and then recall them later on. The gallery discussion about Starry Night taught them how to observe both the subject matter and artist’s techniques in a painting. Given the instructions to tap into their imagination and practice the brushstroke styles Van Gogh used, our young artists unknowingly created Post-Impressionism works of art. 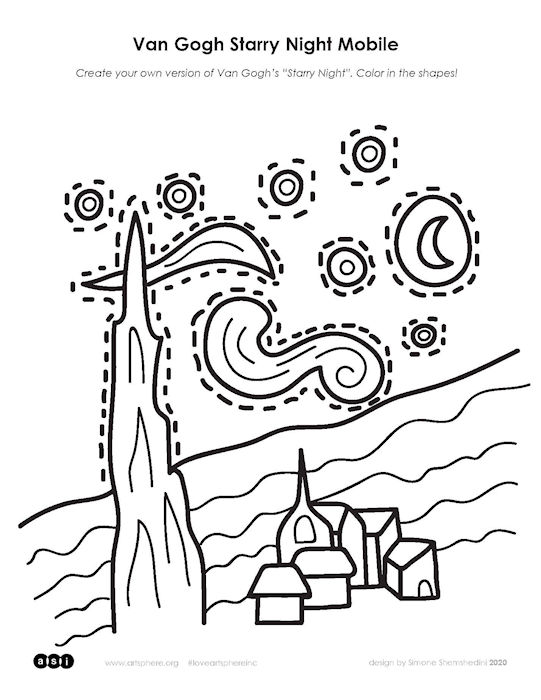