With over 1,100 scenes from the Old and the New Testaments of the Christian Bible, as well as over 1,1,00 stained glass windows, La Sainte Chapelle (the holy place) beautifully embodies the Rayonnant Gothic period. This magnificent chapel was originally built in the 13th century in order for religiously-passionate King Louis the 9th as a private chapel and repository. As a repository, it was built to house twenty-two religious relics that were first acquired by Saint-Louis. In modern times, only three of these relics still exist, and they are now housed in Notre-Dame. 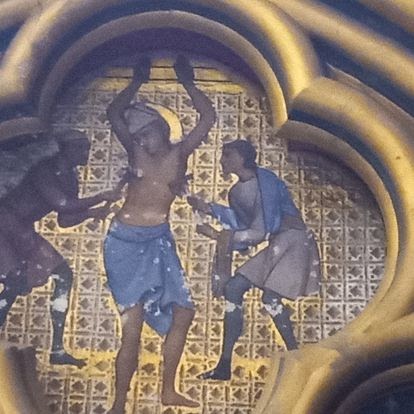 The chapel itself has survived many chaotic times in France – including revolutions, several riots, and two world wars. In the 19th century, many of the most renowned medieval buildings went under renovation by the then architect Eugene Viollet-le-Duc. Eugene Viollet-le-Duc especially focused on the renovations of buildings that were damaged by the French Revolution. The extravagant La Sainte Chapelle can be seen vividly from boats on the Seine River and on the Left Bank (Rive Gauche)

Styles of Artwork and Architecture

Of course, the massive stained glass windows in the chapel with the gorgeous “medieval blue” and other royal hues are impossible to miss. However, many other elements of gothic architecture can be seen in this elaborate building. These techniques include panel painting and illuminated manuscripts.