“Leadership should be born out of the understanding of the needs of those who would be affected by it.” 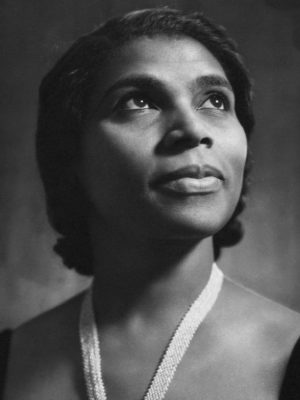 Marian Anderson was born in Philadelphia. At the age of 6, she began singing at local functions where she was often paid 25 or 50 cents for singing a few songs. Her family could not pay for any music lessons or high school. Anderson would perform wherever she could and learn from anyone willing to teach her. She got her first big break at a singing competition sponsored by the New York Philharmonic and gained international notoriety performing for a few dozen Goodwill Ambassador Tours and several Presidential Inaugurations. Anderson paved the way for many African-American artists who followed. The Daughters of the American Revolution (DAR) denied Anderson the opportunity to perform at Constitution Hall because of her color, prompting Eleanor Roosevelt and thousands to resign from the organization. At Eleanor Roosevelt’s instigation, Marian Anderson sang in an open-air Easter concert on the steps of the Lincoln Memorial to a crowd of over 75,000 in addition to a national radio audience of millions.