“Black people occupy a space, even mundane spaces, in the most fascinating ways. Style is such an integral part of what black people do that just walking is not a simple thing.“ 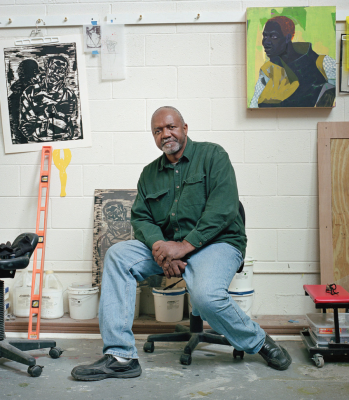 It’s not often that you come across painters like Kerry James Marshall. He focuses on bringing out the finesse and unique aura of the Black figure. In fine arts, there is a large lack of African American representation, and Marshall’s work exposes viewers to that undiscovered world of creativity and beauty. As a child in the Los Angeles community, the Black Power and Civil Rights movement played a huge role in determining his subject matter. The boldness, the darkness chosen for many of his skin tones were a way to challenge racial stereotypes in America. Marshall also felt the colors were a visual way to distinguish the inner and outer appearance of black people, especially men. He’s well known for his acrylic paintings on unstretched canvas, and the way he communicated through symbolism and patterns. You can find many of his works on the Jack Shainman Gallery website.