“Painting is about the world that we live in. Black men live in the world. My choice is to include them.” 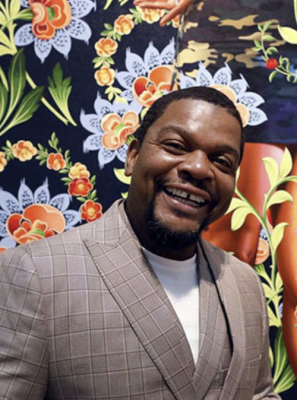 Kehinde Wiley is an American painter best known for portraits of African American men in heroic poses. Born in Los Angeles, he earned his BFA from the San Francisco Art Institute and his MFA from Yale University School of Art. His artwork is influenced by a wide range of artistic movements, including the Venetian painters Titian and Giambattista, French Rococo painting, Islamic architecture, African textile design, contemporary fashion, and urban hip hop. Kehinde Wiley brings the figure of the Black man and woman front and center, forcing the viewer to address the historical erasure of Black bodies in the art world.