“Just don’t give up trying to do what you really want to do. Where there is love and inspiration, I don’t think you can go wrong.“ 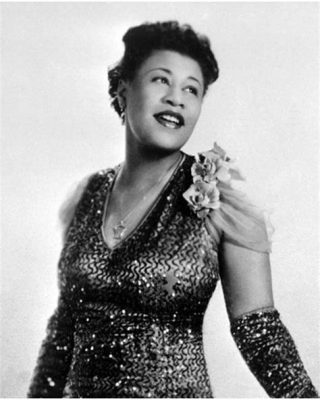 Ella’s unmarried parents separated soon after her birth and she and her mother moved to Yonkers, NY. A year after winning an amateur competition at the Apollo, she joined the Chick Webb orchestra. Her mother passed away when she was 15 and Ella moved in with her stepfather’s sister. Her stepfather died soon after, and Chick became her guardian. Ella recorded her first song, “Love and Kisses”, at 18 and her first hit, “A-Tisket, A-Tasket,” a few years later. She soloed in cabarets, theatres, toured internationally in concert halls throughout the world both solo and with stars such as Louis Armstrong, Duke Ellington, Dizzy Gillespie, Benny Goodman, and more. She appeared in films and on television. She recorded prolifically and sold over 40 million albums.

First African American woman to win a Grammy. Known as the “Queen of Jazz” and “First Lady of Song”. She was one of the best selling jazz singers of all time known for her sweet voice and six-decade career.