“I’m always making a comeback but nobody ever tells me where I’ve been.” 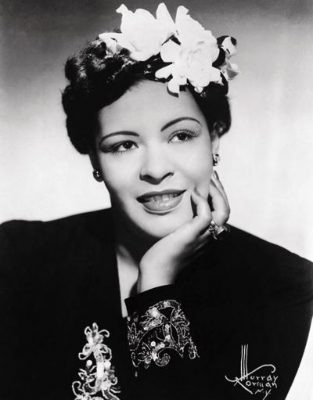 Born Eleanora Fagan (some say her birth certificate reads “Elinore Harris”) to her teenage mom, Sadie Fagan. She spent much of her early years in Baltimore. She rarely saw her father, believed to be Clarence Holiday, who himself became a renowned jazz musician. Her mother married and for a few years Eleanora had a stable life, but when that marriage ended she was often left in the care of others. She often skipped school and was sent to a house for troubled African American girls at 9. She was returned to her mother after it was determined she’d been raped. Music brought her solace and she would sing along with records. When she was a teenager, they sent her back to her mother, who moved to New York City and worked in a House of Prostitution in Harlem. A few years later, she renamed herself Billie and began singing in local clubs. Her incredible talent was marred by her tumultuous life, which included three marriages and substance abuse. Billie died of cirrhosis.