The lyre is a member of the zither instrument family.It was invented by the ancient Sumerians around 2600 BC. In Greek mythology, Hermes is said to have created the lyre. As the story goes, Hermes used the instrument to steal 50 of Apollo’s prize cattle, offering up the lyre to the latter when Apollo became angry. Thus, the lyre is now a historic attribute to the god of music and prophecy, symbolizing wisdom and moderation. Apollo’s son, Orpheus, is also associated with the golden lyre gift from his father. It was used for religious rituals, funerals, private drinking parties, and as singing accompaniments.

The lyre has a few slightly different designs, though the original idea took from the single bow shape of a harp, replacing it instead with two pecheis (arms) joined with a zygos (crossbar) extending from a bowl-shaped sound box with kollopes (tuning pegs). The three-eleven chordai (strings), stretched across the crossbar and pulled down to the wooden soundboard but did not connect into the hollow body directly (much like a modern guitar, the strings run over a brudge).

In ancient Greece, the bowl shaped lyres used turtle shells, and the arms and pegs were made of either bone, wood, ivory, bronze or another metal. The strings were made using cow/sheep gut. Today, box and bowed lyres are wooden, and strings made of nylon are often used. 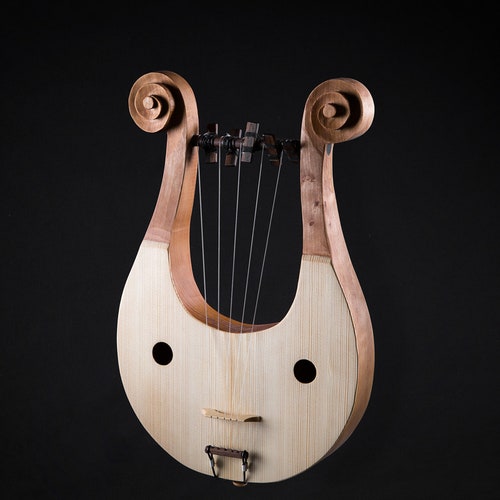 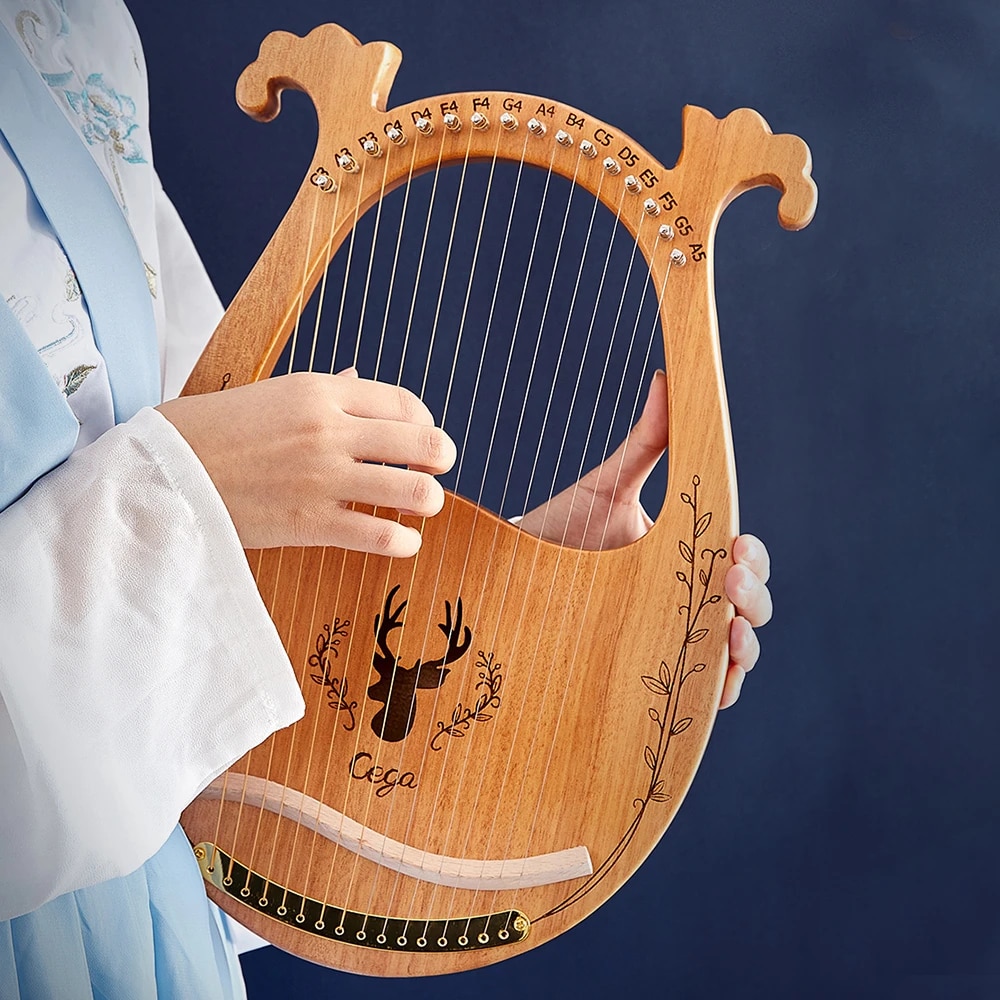 With their light and airy mini-harp sound, lyres are used for classical/contemporary music.

The lyre was typically played either alone by male musicians or as an accompaniment to singing or lyric (the word itself derives from the Greek word for “of the lyre) poetry at rituals. It makes a very tender and quiet sound, meant to be listened to in a small room rather than as part of an orchestra

The original lyres had strings designed to be strummed rather than plucked like its predecessor, the harp. The curved arms stay vertical, and sometimes a wooden or bronze plectrum would be used to play the strings in the right hand, while the left dampened the notes or occasionally plucked/stopped a string. The lyre can be played standing or sitting, but the latter is more common as the lyre rests on the knee of the player. Sometimes a supporting strap is also worn around the shoulder.

Based on how long it would take to learn the harp, it would likely take 1-3 years to achieve proficiency, given you practice for a couple hours every day. Michael Levy is a UK-based composer for the recreated lyres of antiquity, whose musical mission is to create an entirely new musical genre, which could best be described as a ‘New Ancestral Music’ – dedicated to creating new music for the recreated ancient lyre, featuring an exotic palette of ancient musical modes and intonations not heard for almost 2000 years. Basing his recreated lyre playing techniques from both illustrations of ancient lyre players and the various playing-techniques still practiced today in Africa, he has independently produced over 30 releases since 2008.