“Sometimes, folks make us feel strange. But those folks, they’ll have to catch up. “ 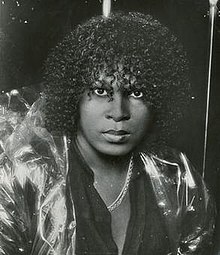 Sylvester (born Sylvester James Jr.) didn’t much care for riding bikes and fishing instead he spent time as a kid instead playing with dolls and wearing his mother’s heels and jewelry. His mother told him he was very strange and his only reply was “That’s ok.” And Sylvester kept this mentality throughout the rest of his life and career choosing to dress and act how he wanted rather than satisfying those around him. He had much success as a disco star and had performances so energetic that the dancing audience would cause the venue to visibly shake. When Disco died, Sylvester’s fame and notoriety stalled until the 80s when dance music became popular giving Sylvester another surge in popularity until his passing in 1988.