“I’ve turned from oil to media of gouache and pencil, separately and sometimes together. I’m trying to discover for myself the power of observation without sacrificing the passion of the art materials.” 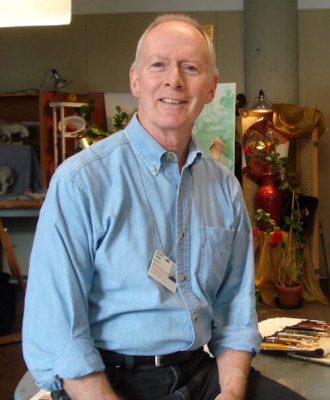 Born in Hampton Virginia, Gilbert Lewis began taking art classes at age 7. He would go on to pursue art throughout his teen years until he moved to Philadelphia to enroll in the Pennsylvania Academy of the Fine Arts (PAFA). In 1967, after completing PAFA’s program, Lewis was awarded the William Emlen Cresson Memorial Travel Scholarship, which he used to travel to Italy, where he was inspired by trecento Sienese painters and the artists of the Florentine Renaissance. After receiving his master’s degree in creative arts from Hahnemann University, Philadelphia in 1978, Lewis began working as an art therapist at Manchester House Nursing Center in Media, Pennsylvania, where he painted portraits of many of the seniors he worked with. Within his chosen medium of watercolor and gouache, Lewis explores LGBTQ+ themes, often based off models he brought to his studio. Later, Lewis would teach at PAFA’s program and other educational institutions. His work has been featured in various exhibitions and collections.