“The most important thing is to live a fabulous life. As long as it’s fabulous I don’t care how long it is.“ 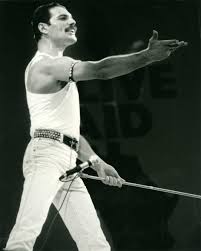 Freddie Mercury was a British singer, songwriter and record producer. He was the lead singer of the famous rock band Queen. It was known by the public that Mercury was bisexual however, he tried his best to keep his personal life private. By the time he was diagnosed with AIDS he did not want the media to use him as a representative of the AIDS crisis, so he never confirmed that he had AIDS until the day before his death in 1991.