The clarsach is a member of the string instrument family .It orignates from Scotland and was invented in the 6th century. It is sometimes referred to as Celtic harp or Irish harp 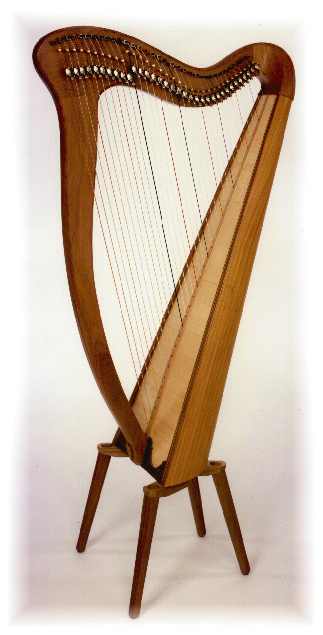 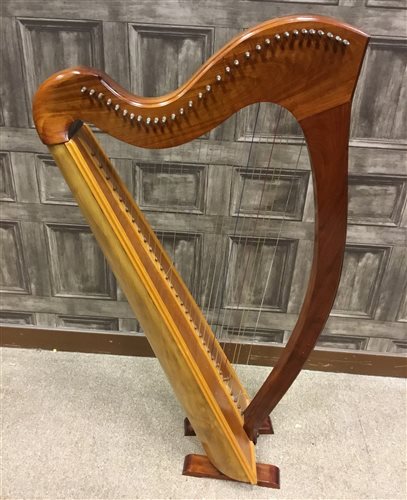 The early history of the triangular frame harp is widely contested, many countries in the United Kingdom claim to be the country of origin. The earliest Irish references to stringed instruments similar to the clàrsach are from the 6th century, notably that Irish law specifically refers to stringed instrument players to be seated with nobility during banquets and feasts instead of with other entertainers. However, references to the clàrsach do not appear until 1500; it is unclear when exactly the clàrsach came to be.

In construction, the Irish and Scottish harp may, in general, be considered as one. A characteristic feature is the metal strings. The wires were attached to a massive soundbox typically carved from a single log, commonly of willow, although other woods including alder and poplar have been identified in extant harps. This harp also had a reinforced curved pillar and a substantial neck, flanked with thick brass cheek bands. The strings, usually played with the fingernails, produced a brilliant ringing sound. This type of harp is also unique amongst single row triangular harps in that the first two strings tuned in the middle of the gamut were set to the same pitch.

The clarsach is used to played a variety of music such as the ballads, folk, blues and jazz.  It can be played both solo or with a group of people.

Other harps from across the world are similar to the Clàrsach.

It has been said that players should start to learn as early as 7 years old, as the clàrsach is difficult to learn.

Marianne Bouvette, classically trained at the French Conservatoire, is a Belgium-based Canadian-French artist that plays music and aims to “celticize” famous songs on the harp, as well as “jazzifying” them on the piano with virtuoso acrobatics, on a mission to popularize traditional acoustic instruments with a broad audience.