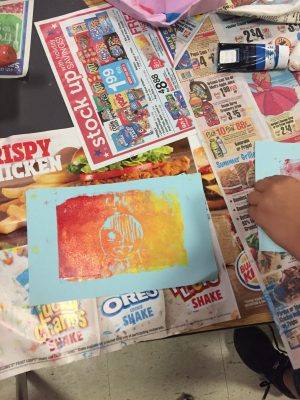 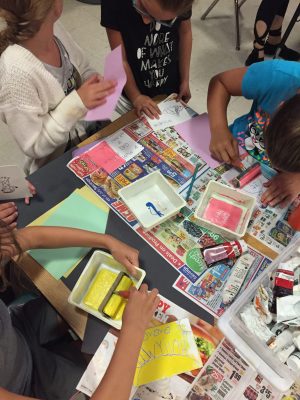 Printmaking has been one of my favorite things to teach because it’s so versatile. I didn’t take a printmaking class until college but I remember being amazed by all the creative possibilities. Even though the version of printmaking that we taught the kids at Fishtown and Cione is simpler than fine art methods, it was cool to see the same excitement and sense of experimentation in our students. In this method, we had the kids draw with pencil or pen on rectangular styrofoam plates to create indented lines. (So much simpler than chemically treated copper yet still very satisfying!) The subject matter the kids chose varied a lot: giraffes, sunrises, tracings from the “passports” we gave them, emoticons, dinosaurs, family members’ names. One girl even made a pink print with a bassinet and a binky for her pregnant mother.

The experimentation was also so fun to watch. A few kids struggled with, and eventually figured out how to make prints with text in the right orientation. A few other kids realized they could use multiple colors of ink on one print. This produced really fun results including a few gradient prints.

We were able to do a full class of this with the older group at Cione on July 31st. On our last day of classes, August 7th we did printmaking with both groups at Fishtown after spending the first half of the class taking a survey and teaching the color wheel. Later at Cione, we repeated the survey and color wheel with both sections. It didn’t leave much time for the little kids, who struggled a lot with the survey and color wheel. (It seemed like the rain was making them stir crazy) So the little kids spent the remainder of the class free drawing and working on their passports. In the older group we returned to printmaking after the survey and color wheel were finished since the kids loved it so much the first time. It was great to see them build on their ideas from the week before.