By the fourth week of the program, we were able to identify the teaching methods and behaviors that worked well with the kids. An example of this would be for the preschoolers, in order to get all of their undivided attention Kristin would need to be extra loud and use a sense of humor to catch the children eye. By doing this, even those who did not speak english as a primary language, would be able to understand and observe the social skills that were taking place. Since every student had a very different background, we needed to think divergently in the classroom. We did not let the language barrier get in the way in the classroom.

Moreover, we would utilize and collaborate with the translators that were assisting in the classrooms as well as prioritize empathy. An example of this would be one of the preschoolers was very upset about her living situation, specifically not being with her mother. She was only four years old and only spoke Spanish. She was very upset and even the translating assistant could not get through to her. I asked the translator what was wrong and she explained the situation. By sitting with the student and working tougher, we were able to turn her project into something for her mom, further connecting the student with emotion and colors. 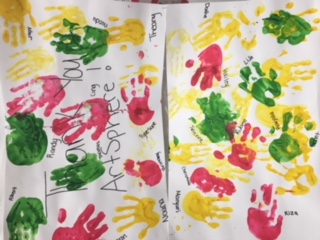 By the end of the class this student was happy and proud to have made her project for her mother but little did she know she had translated her matter of contention not only into something positive, but she was able to do this through creating art.