The past two Tuesday afternoons were full of excitement for me and for the students at Southwark. We started off our semester on Tuesday, October 23rd with some weather-related projects to coordinate with what the kids were learning in class. But before the fun started, we helped them do their homework. Despite a few complaints of “can’t you just do it for me?”, it was all finished and A-worthy! As students finished up, I kept them busy with a chaotic card game that can best be described as Go Fish meets Scrabble. When it came time to make art, they were eager to get their hands on the projects and take creative liberties to really make it their own. Students combined their separate spiderweb projects with their windy trees to create a spooky October scene. We squeezed in a third project in the last ten minutes: a bat circling his prey, swinging around a popsicle stick on a piece of yarn. Kristin explained how bats use sonar and the kids got a hands-on demonstration. It was great! They all enjoyed themselves and were looking forward to next week. 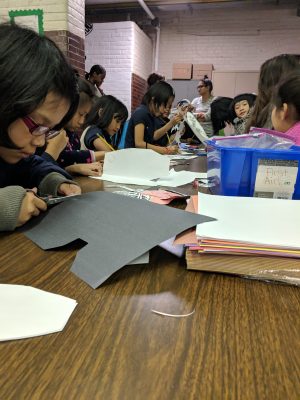