There was a lot of stuff happening on this day at Fishtown Rec Center- I was coming in to teach art, a marine life company was visiting, they won something special as a treat, AND everyone was celebrating “Christmas in July” — whew! A jam-packed day for these Santa-hat-wearing-kids!

Bigs – Fishtown Rec Center
I said it before and I’ll say it again.. SHARK WEEK! I asked if anyone watched TV and caught any of the shows on sharks, a few of them had and many were just simply interested in sharks. We began by folding our papers in half like a card, then in half again but lengthwise/narrow, to create 4 long sections. Then we unfolded it. We discussed the color theory of tints and shades. I explained that tints are when you add WHITE to a color and shades are when you add BLACK. I dispensed black and blue paint for everyone to share with a partner. The children mixed the paints together to create a darker blue. They painted their top section with this. Then, they wiped their brushes off and I added just blue to their plates. They painted the second section all blue (hue/pure color). Then, I added white + blue. They mixed and painted the third section with this tint. Last, I added lots of white and they mixed it with whatever  blue was left on their plates or on their brushes to create a very light blue and painted the fourth section. They really enjoyed mixing and painting. Before the students painted, I suggested a challenge- paint only half of each section and try to GRADUALLY step from one color to the next (i.e. very dark blue, dark blue, kinda dark blue, blue, light blue, very light blue, very very light blue, etc), one child accepted this challenge and painted phenomenally! 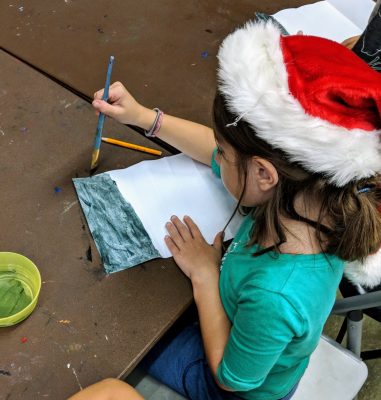 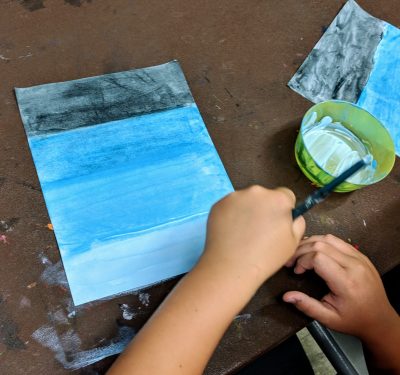 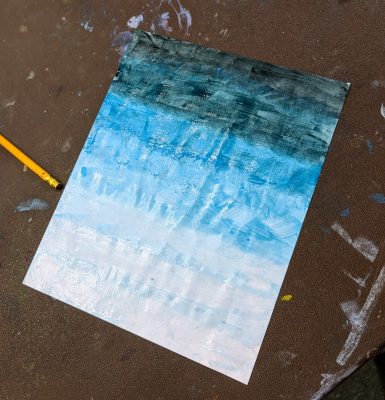 It’s been raining a lot over here on the East Coast, so the humidity makes everything that much wetter. I knew it was going to take awhile for our paintings to dry, so I read the children a story Misunderstood Shark by Ame Dyckman.

Next, they selected their background construction papers. I asked them to rip their paintings along the colors to create ‘waves.’ Many were unhappy about ripping and wanted to use scissors. I asked them to try ripping first and then they could use scissors after they at least tried. Then they glued one piece at a time, layering the water in steps, and overlapping just a bit. Next, we used Sharpies or cut paper to create shark fins in the water. Students got creative by adding a sun, clouds, sky, sunset, island, coast, etc! 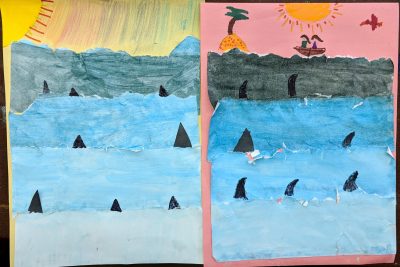 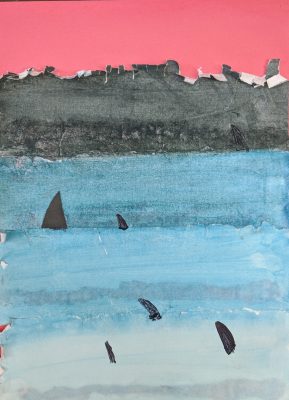 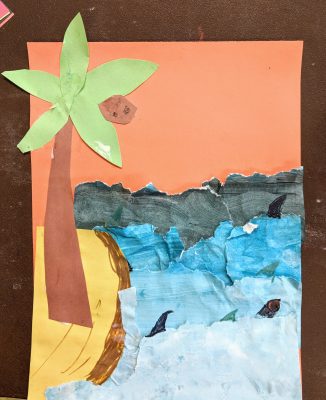