Twenty-one young and spirited, creative minds joined together to make a Field of Flowers based on Hurvé Tullet’s book,  Art Workshops for Children. They were eager to use their new found favorite material, Kwik Stiks, which is essentially used like a glue stick, but it’s fast drying tempera paint. The book details instructions, which the students follow along as they go. First they started by making dots all over the paper. They swapped places, and colors in order to fill the space with a rainbow effect. Once they made a ton of dots. They were instructed to make circles. Again, they shared their colors and moved all around the table. After each full instruction, I had them stop, and throw their hands up in the air (gaining their full attention, and making it a fun part of the process). I then showed them what to do with all of those dots and circles. They began to add petals shooting off of those dots and circles. Their white paper was transformed into a field of flowers.

When the students finished up, they sang a few more songs with Mr. Lee, the music teacher. While the students were singing, I glued down all of their hands they traced the week prior. I wanted to show that all of the students had a hand in making the project, but also because those blue cut-out hands related to an earlier project I did with them where they came up with a story for an ancient glass blue hand artifact.

The students really loved to run around and just have fun while making this piece. 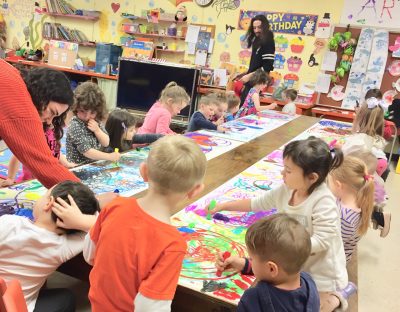 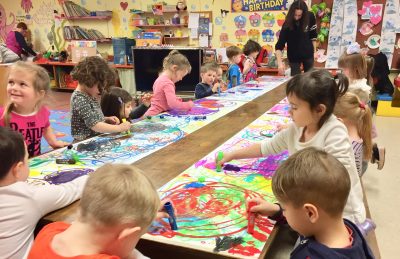 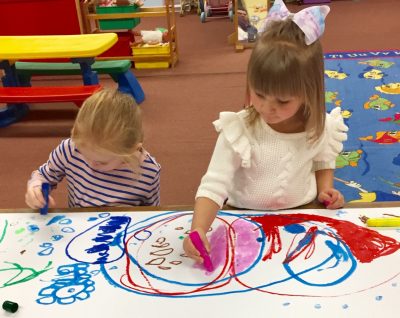 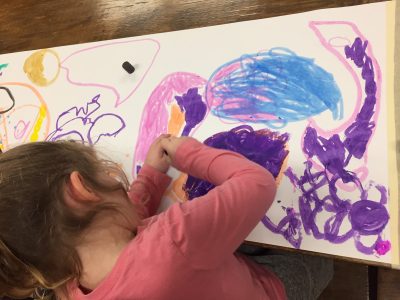