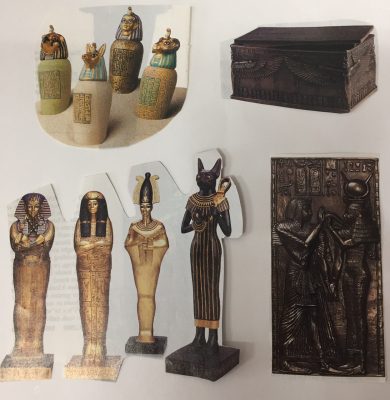 1. Students use plastic bottles and newspaper and wrap with tape to build the form of a sculpture.

2. Students choose from an existing  Egyptian deity or make up their own.

3. Students cover sculpture with either bronze, black or gold paint.

4. Students use permanent markers to add hieroglyphics glue and red paint for details.

5. Students create a story about their sculpture pretending to an archaeologist.

Create a wall plaque is based on carvings found in such tombs, telling the tale of a pharaoh and his queen in fascinating hieroglyphics.

Egyptologists agree the pinnacle of Egypt’s imperial glory came during the Amarna Age (1353-1336 BC) when Pharaoh Akhenanten cast aside polytheism in favor of a single god, Aten, symbolized as the sun.

When excavating the tombs of the pharaohs, archeologists invariably came across numerous canopic jars crowned with the heads of deities who were thought to accompany their spirits to the afterlife. Hand-sculpture feature the falcon-headed god Horus, Anubis the jackal, Imsety, guardian of the west, and Amon the ram.

Make an enchanting box to reproduce the look of an artifact unearthed from a pharaoh’s tomb. Etched with hieroglyphics and winged figures of the goddess Isis, finished with a warm bronze paint.

Project 5: Pantheon Of The Gods

The complexity of polytheistic Ancient Egypt is well-represented in their extraordinary statues.Two of these magnificent sculptures depict sarcophagi painted in the likeness of King Tut and a Ban Priest. Others featured include Osiris, god of the dead , who was the brother and husband of Isis; and Bastet the cat goddess of festivity and fertility.