Project Title: Out of This World Collage!

The kids at Fishtown had a day filled with talk about a space after the lunar eclipse that just happen recently. Our first project consisted of making a colorful rocket ships out of the children’s names in the middle of take off. Along with gluing pieces of paper down to make their rocket ships, it was also fun time for the kids to show us how they could spell their name as some were so eager to label their own rocket ship that they had made!

To keep the space theme going the next project was an astronaut floating above the earth surrounded by stars. The kids definitely had a good time placing their stars around their astronaut, and also having fun with the extra stars holding them on their heads claiming they were from space. After they had settled down and landed back on earth, Miss Cara sat them around on the carpet and had short discussion about their knowledge of space. Almost every kid had something to share with what they knew about the planets and the stars, it was hard to keep up with their facts! Although it was exciting to know they were all so happy to share what they knew and listen to Miss Cara share what she knew! 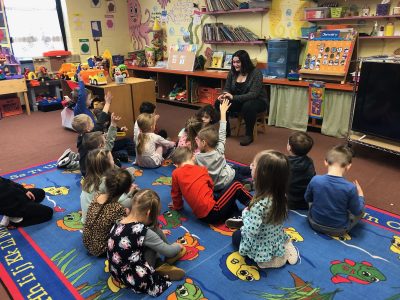