Pre-K at Fishtown Rec Center gathered around to review the letters of the alphabet. They were able to recognize and recite each letter, but they were challenged to name something that began with that letter. This proves to be a more difficult activity. Once we went over a few examples, the children understood the word association better. After going through all the letters of the alphabet, they were able to choose which letters they wanted to draw and image for. One boy chose the letter “A for Anaconda” because he is obsessed with that particular snake! A girl drew three pictures for the letter M – a milkshake, a mirror, and a mouse. Another filled up the entire Z page with tons of ZOMBIES! (Pink brains included!) We had a lot of fun – and laughs – recalling our letters, brainstorming what began with that letter, and executing with a drawing from our minds.

This simple lesson just requires a brief amount of preparation, so save those Ellison die-cut letter backgrounds, and glue them to blank pieces of paper to start your own “Class Alphabet Association.” 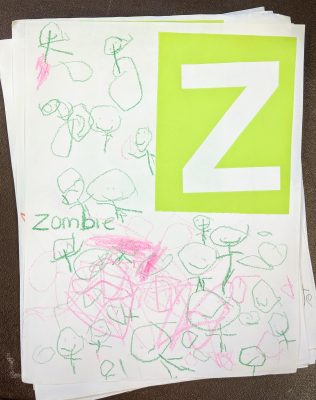 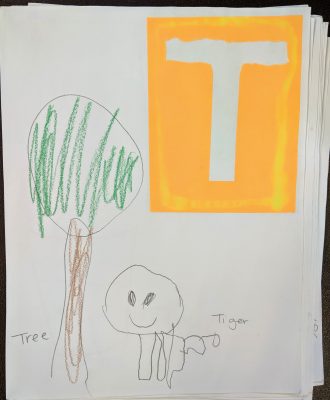 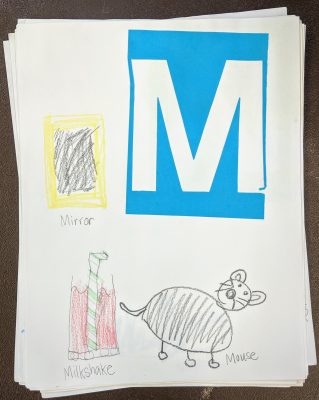 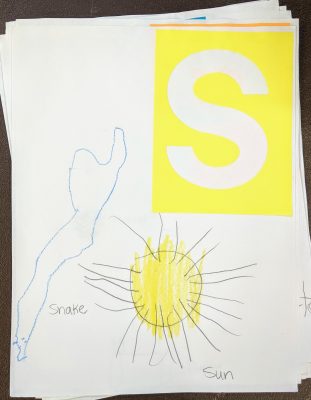 Project Title: Alphabet Association Pictures
Description: Students will practice their letters, name a word that begins with that letter, and draw a picture of the object/animal/thing on the letter’s page.
Author: Dayna Ensminger
Grade level or Target Age Range: Pre-K, Kindergarten, 1st Grade

Historical Art Examples or References:Various typography, word association books (i.e. “A is for Art Museum” by Friedland and Shoemaker – a book based on the Philadelphia Museum of Art), manuscript illuminationsVocabulary:Alphabet, draw, imagineMaterials:Pre-made letter pages, pencils, crayons

Demo/Directions:
1. Review the alphabet.
2. Ask students to name words that begin with the letter you’re focusing on. i.e. A for Apple, B for Ball, C for Cat, etc
3. After you go through each letter, have students choose their favorite letter and draw something that starts with that letter.
4. Pass and swap the letter pages until all pages are filled up!
5. Display your class alphabet for all to see!